Why Binge-Watching TV Could Lead to Early Death

The hugely popular habit of binge-watching TV shows is linked to health hazards that may lead to an early death. Endless hours sitting in front of a screen increase your risk for conditions that can be fatal.

When we were kids, we were told that TV was bad for our eyes. Over the decades, we’ve also learned that childhood exposure to TV violence may lead to becoming an aggressive adult. Today, however, the stakes have been wildly raised. The results of viewing non-interrupted, continuous hours of television can cause conditions that may have dire endings.
A recent study published in the American Heart Association journal Circulation, claims that binge-watching raises the risk of developing a blood clot in the lungs. Pulmonary embolism is a highly dangerous condition closely linked to inactivity. More than 25% of people who suffer from an untreated blood clot in the lungs die.

A Japanese research team from Osaka University Graduate School of Medicine observed over 86,000 participants. The people were between the ages of 40 and 79. The team studied the participants’ TV viewing habits for over two years, back in the late 1990’s.
The average continuous watching time was two and a half hours per day. Those who watched over five hours a day were twice as likely to die over the following 19 years. For every two hours over that, the watcher raised his risk of the deadly blood clot by 40 percent.
This study raises grave concerns, but in total, there were only 59 deaths reported from the pulmonary embolism. That was out of 86,000 participants. The most frightening fact, however, is that obesity was the number one factor that was linked to the formation of the clots.

Aside from the news about blood clots, there are other known health risks from spending large amounts of time binge-watching. Your risk of diabetes may increase. One study provided research that watching TV excessively increased individuals’ risk of developing diabetes over three percent. The same study indicated that people move less while watching TV than doing other sedentary things (like working at a desk.)
Sleep loss is another result of addictive TV watching. Without proper rest, we leave ourselves vulnerable to becoming ill. Our immune systems can become compromised. And, snacking and drinking sugary beverages while binge-watching can lead to a growing waistline in no time.

No one is claiming that TV watching is bad for you—in moderation. Excessive amounts of hours in front of the screen are where the problems lie. Start by monitoring and setting a limit the time you, your spouse, and your children spend sitting in front of a screen. A helpful cliché: moderation is key.
Experts claim that even getting up to walk around every half-hour for five minutes can help. Stretching, doing sit-ups or push-ups while viewing can keep you in shape and entertained! Watch your health as you watch your shows and reap the benefits of both. Stay tuned…
For more articles on best health practices for you and your family, see some previews at www.GetThrive.com 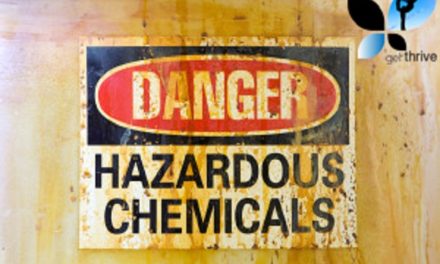 What’s Up with Back to School Shots?